Skip Navigation
Expand
Collapse Submit a Service Request Contact Information for Technical Support My Service Notifications
Prompted to save changes, when no changes have been made
Answer ID 5555   |   Last Review Date 03/18/2019

Why am I being prompted to Save when closing a record I have not made any changes to?

Our agents sometimes open a record and then close it without making any changes. However, they still receive a prompt to save their changes: 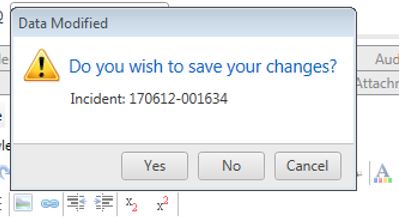 The cause for this behavior is due to a change being made to the record. If you have opened a record such as an incident, contact or answer then immediately close the record and are prompted to save, this can be due to one of the following reasons.

The workspace being used by your staff account to load the record may contain a rule to change the value of a field on the workspace under certain conditions such as when the record is loaded.

If you experience this behavior with answers and have ruled out workspace rules, it is possible that the Tidy utility may be repairing the source code of the answer content. For more information regarding Tidy, please see Modifications to the HTML source of documents.

Another option is that the agent has an Email Signature associated with their account. In the standard incident workspace, the Response thread opens by default when editing an incident.  Where the staff account has a signature, that value is automatically added within that Response thread. This is seen as making a change.  As a result, if the agent then tries to close the incident, they will be prompted to save that change.

4. Incident has an uncommitted response.

If an incident response thread is saved without being committed/sent then later, if the incident is opened and closed without any changes it will prompt asking to save changes.

5. Agent assigned to solved incident is transferred to a different group.

Was this answer helpful?

Forgot your username or password?
The page will refresh upon submission. Any pending input will be lost.